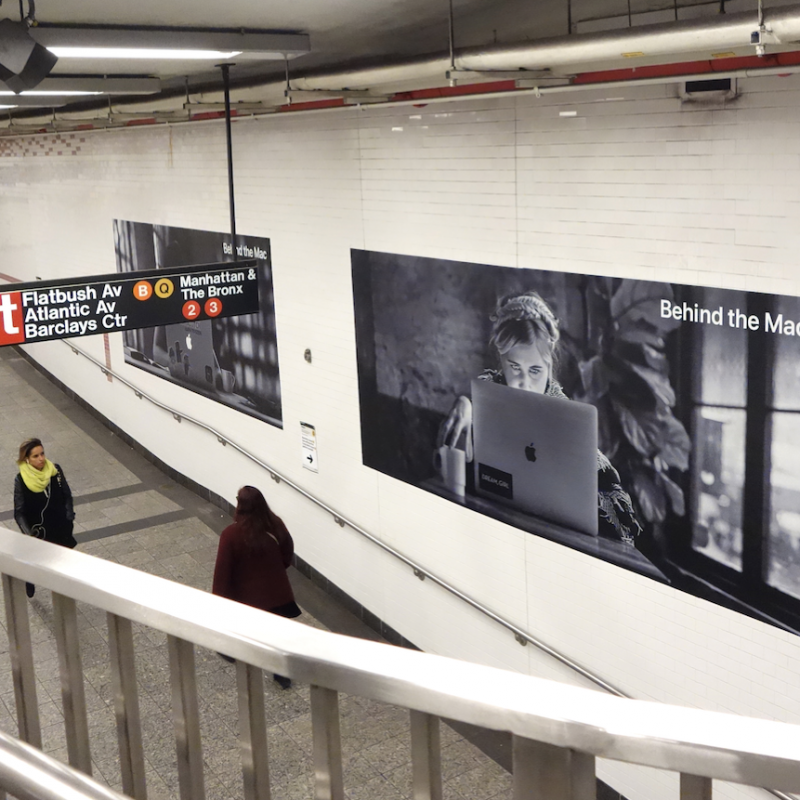 Alumnus Featured in an Apple Campaign

Apple’s “Behind the Mac” campaign featured our very own alum, Erin Bagwell (COM ’09)! Bagwell now works as a documentary filmmaker and was the creator of “Dream, Girl” which was screened at the White House in 2016. Read our Q&A with her below.

What is this campaign and where it has been displayed?

Apple’s Behind the Mac campaign shows that Behind a Mac, there is a story of someone following a passion. Featuring some of the most creative people in Brooklyn, the photos from the campaign I was in were seen in subway ads, on billboards, and were even part of Tim Cook’s keynote presentation to announce Apple’s new products and technology at the Brooklyn Academy of Music in October.

Apple has been an enormous part of my creative journey, and I wouldn’t be able to have produced my first film without the technology of this incredible company. Having a Mac has given me the ability to execute and produce the film of my dreams and it’s an honor to be part of this tribe of creatives representing Brooklyn in the new campaign.

How did Apple find out about you?

I’m not sure how anyone finds me, but it’s my personal practice to answer every email I receive. You never know what will come your way if you are open, available, and respond timely to new opportunities.

Can you tell me a little bit about what it was like to see your ad in the wild?

I was coming home from an afternoon event and I decided to get off the Q train to swing by my husband Sal’s office to say hi and bring him a cup of coffee. As I was walking through Atlantic Terminal I saw all these gorgeous black and white photos displayed in the station. That’s when I saw the Dream, Girl sticker (and my face) among them!

I was in totally shock and had no idea the ads were live or that I’d bump into them that day. I cried and FaceTimed my mom. Later that night, Sal and I joined a couple of friends at the station and we walked around taking pictures and celebrating the launch of the campaign.

It’s surreal to think of all the long nights editing on my Mac and then to see these images come to life in my neighborhood. It was really special.

What has been your reaction to it?

I’m often seen as a “female” filmmaker as opposed to just a filmmaker, which means that people assume the work I do is linked to a non-profit and isn’t viable for the mainstream market. However it’s always been my intention to have Dream, Girl be a household name and to make money from my business like any other entrepreneur.

When I was at Canisius I use to devour business books and study company cultures. One of my favorite companies to read about was Apple. To be a founder means you have to walk your own path, and set your own standard of want to achieve. No one sets the bar like Apple- from their brand, to their products, to their in-store experiences they set the standard of excellence. So to have them see the work I’m doing with Dream, Girl and Feminist Wednesday blows my mind. It’s such a privilege to have them shine a spotlight on what I’m trying to build and work on everyday.

What have you been up to since graduating from Canisius?

Since graduating from Canisius, I moved to Brooklyn, was sexually harassed working my 9 to 5, started a feminist storytelling platform called Feminist Wednesday, and met a slew of female founders who inspired me to quit my job. From there, I created a documentary about them called Dream, Girl that raised $100K on Kickstarter and premiered at Obama’s White House in May 2016.

Since the launch of the film I’ve traveled around the world to Egypt, Tajikistan, and Dubai and have spoken at NASA, TIME, Goldman Sachs, and more to screen the film and discuss female entrepreneurship and inclusivity in the workplace. Dream, Girl is available for community screening events or to watch online now.

At home in Brooklyn I co-host a weekly podcast with Diana Matthews called BeaverTalk where we give Hollywood unsolicited advice about feminism. Episodes are available on iTunes and released every Feminist Wednesday.