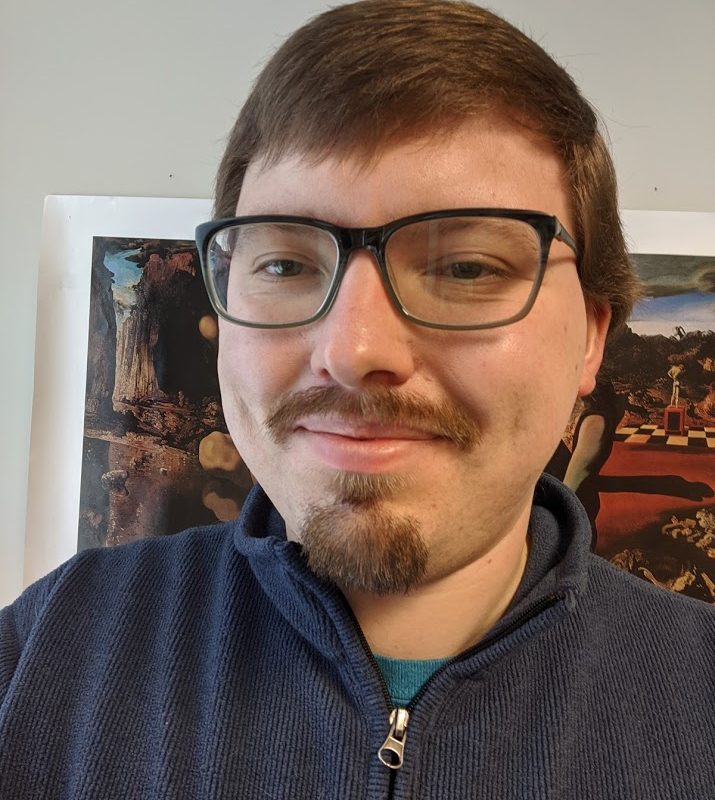 1.) Where do you currently work and could you describe what you do?

I have taught at Canisius as a Clinical Instructor for several years now and became a full-time faculty member in the Digital Media Arts Program during the 2019-2020 year. I have taught courses including: Interaction Design (making websites do things when a user uses/interacts with a website), Mobile Game Design (designing games for mobile devices, like phones and iPads), Serious Games (creating games on serious topics like education, history, politics, etc.), and 3D Graphics (an introductory course to 3D modeling). Now, I am working as an Academic Technologist for the Center of Online Learning and Innovation (COLI) at Canisius. I help faculty & staff to use D2L and other online tools (like Zoom and Google Drive) to better facilitate learning and discourse amongst students. This is obviously a pretty hot-topic right now with all courses having some sort of online component if not being online in their entirety. This can include creating video tutorials for the COLI YouTube channel and answering Helpdesk tickets/emails to one-on-one meetings via Zoom.

2.) What are your favorite memories of Canisius?

My favorite memory of Canisius has to be from my last semester of undergraduate courses. Fusion went to Lasertron every year but I had never gone due to working/studying (and not really having much interest). A few friends and I were able to get on opposite teams for cyberball and we had a blast. We also played Secret Hitler which was remarkably more interesting than I had thought.

3.) What advice do you have for current students?

Some advice for current students is not to work yourself too hard. Many students will be burned out by the end of the semester/year/undergraduate career. Take some time for yourself (not too much time obviously). Play a game, go to the movies, relax every once and a while. If you get a C (as long as you do not get too many) it really is not the end of the world; it just means that you had less interest in the course which is fine. That is the point of Canisius—to help you find what you are interested in and then excel in that.

4.) Were you involved in any clubs or internships at Canisius?

I was involved in two clubs. Digital Media Arts Club—DMAC–(which is now called Digital Media Arts and Ad Design Club– DMAADC) all four years. I think I held a few positions—secretary and then eventually vice president. I was also involved in Fusion for a while, but not as an e-board member—just as a student. I also went to on internship at Buffalo Game Space. I was able to create a game (which was based on a tutorial but I added in my own models and did more with it than what the tutorial went through) which kind of a Space Invaders type of game.

5.) How do you think Canisius prepared you for the real world?

I think Canisius prepared me to be more open about certain things. I come from a small town and in general most people have the same views on things. Canisius allowed me to grow as a person and be more understanding of opposing views. Canisius also allowed me to make lifelong friendships that are still going strong today.